Golf in Vietnam is an experience to remember for a lifetime. From short breaks at championship Vietnam golf courses to explorations of golf, history and culture, Vietnam now has it all. One of the best up-and-coming golfing destinations in the world, the country is dynamic, safe, and affordable. From the excitement of modern Saigon to the thousand-year-old streets of Hanoi, from the sea and sand in Danang and Hoi An to the mountain fresh air of Dalat, the choices are endless. Combine this with world-class Vietnam golf and accommodations to suit every golf traveler and you have the foundation of for the ultimate Vietnam golf destination. 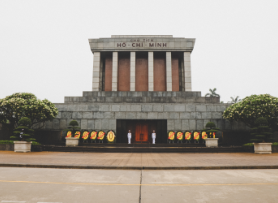 Hanoi is Vietnam’s capital and the country’s second largest city. The city is a fascinating blend of east and west, with Chinese influence from centuries of dominance and French design from its colonial past.
Hanoi is a wonderful location to base yourself for a golf tour. There are so many courses to choose from that you could play almost play a round a day on a different course for 2 weeks.
Nowaday, golf is enjoyed by locals and visiting golfers alike. Hanoi is the best place to organize many championship courses the best of which include Van Tri, Sky Lake, Tam Dao, Chi Linh Star, and Kings Island.
Hanoi is also the gateway to Ha Long Bay, Sapa and Ninh Binh so there are many fabulous tour option if you are looking to extend your trip.

From September to May of next year This is the biggest national holiday, and can be compared to Christmas in Europe. Most of Vietnamese people will take a week off from work and gather with their family and friends in their hometown to celebrate. Based on the older, Sino-Vietnamese calendar, Tet is the “Feast of the First Morning of the First Day”. Many Vietnamese people prepare for Tet by cooking special cuisine and deeply cleaning the house. Every year, after the 1st Dragon Day of the 1st lunar month, the Giay minority in Ta Van village, Sapa, will celebrate their Roóng Poọc Festival to pray for harvests, health, and weather. Right after the opening ritual finishes, traditional music heralds the start of exciting folk games which draw a huge crowd. The women actually “pretend” to lose the war, which should bring prosperous crops in the coming year. 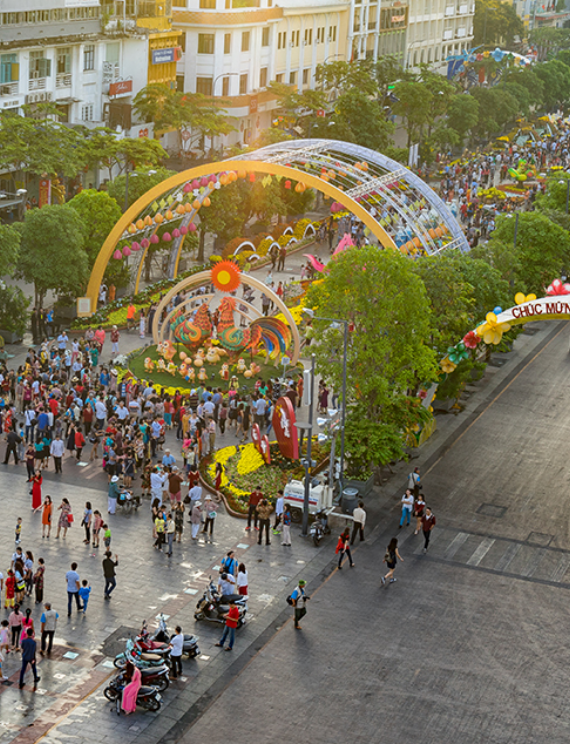 Take a stroll down Nguyen Hue street in Ho Chi Minh City during the Tet Holiday to admire the street’s annual flower festival. From January 22 to 28, this pedestrian boulevard will be transformed with elaborate flower displays, artwork, and LED lights. Themed installations will be set up along the 720-meter stretch, and visitors are welcome to take photos with the flower arrangements – a favorite part of the city’s Tet festivities. Giong Festival is annually celebrated in spring time in several parts of Hanoi in order to commemorate Saint Giong, one of the “four immortals” of Vietnam. According to cultural experts, the festivals held in the Phu Dong (where Saint Giong was born) and Soc Temples (where he ascended to heaven) are the most meaningful and notable, which have been recognized by UNESCO as pieces of Intangible Cultural Heritage. The Bai Dinh pagoda complex is nestled in Bai Dinh Mountain, Ninh Binh. Bai Dinh holds many records in central Vietnam: the largest pagoda area of Vietnam at 107 hectares, the biggest bronze Buddha statues in Southeast Asia (36 and 27 tons), the most La Han statues in all of Vietnam (500, built from 2-meter slabs of marble). This makes it a very special place to honor both historical heroes and the Divine. The Perfume Pagoda, 69 kilometers outside Hanoi, is doubtlessly the most famous Buddhist pilgrimage site in northern Vietnam.Many pilgrims reach this sacred cave to pray for happiness and prosperity in the coming year. The Perfume Pagoda stands alongside a group of caves – an impressive architectural ensemble of both human and natural creation. Several activities dominate the festival at its three venues in Huong Tich, Tuyet Son and Long Van. The lofty Yen Tu pagoda complex used to be the center of Buddhism in Vietnam in the 11th century, and also boasts the origin of the Buddhist sect Truc Lam. Thousands of visitors come to Yen Tu after Lunar New Year to pray for luck and health in the New Year. They believe that if they can climb to the top of Yen Tu Mountain, they’ll gain even more good over the year.