Malaysia is one of the few destinations in South East Asia where golf remains accessible and affordable. You can enjoy a round of golf surrounded by the cool hills and tea plantations or alternatively head down to the fringes of the South China Sea in this country of over 200 golf courses. 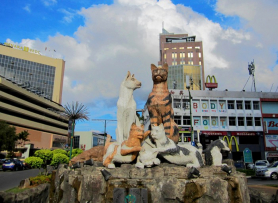 Kuching is the capital and most populous city in the Malaysian state of Sarawak. In the Malay language, Kuching means "cat" because you can easily see cute cats all over the city. It is a major culinary destination for tourists and a major gateway for visitors to visit Sarawak and Borneo. Some of the destinations in Kuching: Kuching Wetland National Park, Bako National Park, Semenggoh Wildlife Centre, Rainforest World Music Festival (RWMF), Fort Margherita, Kuching Cat Museum, Museum Sarawak State Museum,...

From April to September

Over a million Hindus gather every year at various temples nationwide to celebrate Thaipusam. The exact date of this important Hindu event is based on the full moon day in the month of Thai (January/February) in the Hindu calendar. Thaipusam is a celebration dedicated to the Hindu deity Lord Murugan (youngest son of Shiva and his wife Parvati). Chinese New Year is the largest Chinese Festival in Malaysia. During the event, you’ll see lion and dragon dances around the city, which involve people dressing in costumes to perform ritualist dances for good luck and to chase evil spirits away. Chinese Malaysians will have the dances performed at their homes, shops, and businesses. Some cities have lion dances, performances and traditional music in public ceremonies.

Malls and public spaces have red lanterns for decoration. Children and teenagers traditionally get ‘ang pow’, a red packet filled with lucky money. Red is the colour of good luck in Chinese culture. Mandarin oranges are very popular during this festival, and every house you visit will give you an orange.

The Lantern Festival concludes the 15 days of Chinese New Year. Children will attend temples in the evenings carrying paper lanterns. 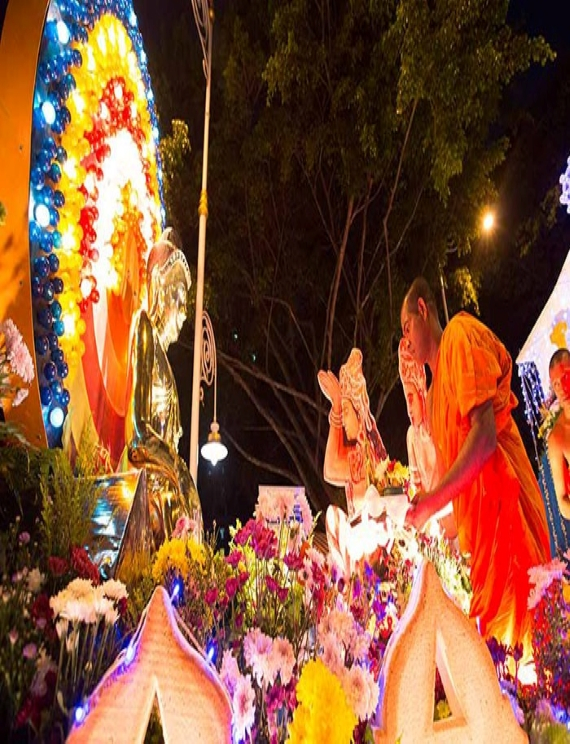 Buddhists in Malaysia celebrate Buddha’s birth, enlightenment and death on Wesak Day. It is sometimes referred to as Buddha’s Birthday, Buddha Day or Buddha Purnima. Wesak Day is celebrated on May’s full moon.

The observance of Wesak begins at dawn when Buddhists gather in temples. They meditate on the precepts of Buddhism. Attendees at Wesak Day services also make donations and pray. Many Buddhists go to the Malaysian Buddhist Association building and wait in line to wash a statue of Buddha. They believe this ritual will cleanse their souls and purify them. They say prayers and end their celebration with a vegetarian meal.

The celebration of Wesak Day in the city of Kuala Lumpur in southwestern Malaysia ends with a parade. This parade of decorated floats lasts for several hours. One of the floats usually has a large statue of Buddha. People walk beside the floats carrying flowers and candles. Hari Raya is one of the biggest holidays in Malaysia, and many Muslims (and even non-Muslims) return to their family home (balik kampong) driving or flying home for a couple of days before the day to be with their families and loved ones. There are often jams during this travelling time but these soon resolve as other travellers reach their destinations.

Hari Raya Aidilfitri sees families and friends seeking forgiveness from each other, visiting ancestors’ graves, saying prayers at the mosque and visiting relatives and friends to feast traditional Malay delicacies like ketupat, rendang, satay, lemang and curry. In Malaysia, children are given token sums of money from their parents or elders. Deepavali, or the ‘Festival of Lights, is the most colourful festival in Malaysia. Local Hindus celebrate by using coloured chalk to draw patterns and shapes on the ground while at the same time scattering coloured rice. All races and religions are welcome to join in the event, which takes place in people’s houses or public areas such as the mall.

If you’re in Malaysia during this event, expect a lot of Indian food on sale in the streets. Homemade samosas, murukku and curries get sold on stalls making an already wide variety of Indian food even more readily available. Little India, near KL Sentral, in Kuala Lumpur will be full of colour and activities at all times of the day and will be well worth checking out.