A prominent club in the local and regional golf scene since its inauguration in 1993, Laguna National is one of Singapore’s premier golf and country clubs. Laguna National boasts two 18-hole championship courses that have won prestigious accolades and hosted international championships, including the European Tour’s Singapore Masters, the Korean LPGA’s ADT Caps Tour Championship, and European and Asian Tour co-sanctioned event, The Championship at Laguna National.

Affectionately dubbed 'The Grand Old Lady', the Masters Course is a much-loved treasure that has stood the test of time. For the best part of three decades, the Andy Dye-sculpted layout has been lauded for its fast and true Bermuda grass greens, towering rain trees, and beautiful lakes. In the best traditions of parkland-style courses, the Masters demands accurate approach shots and astute course management - attributes that have contributed to it winning multiple awards and widespread plaudits from professionals and amateurs alike. Following an extensive upgrading and modernization program, the Masters re-opened to acclaim in September 2017. All fairways, tees, and green surrounds were grassed with Platinum Paspalum, a vibrant playing surface offering a visual treat and crisp lies. As part of the renovation, many of the approaches were reshaped and contoured, creating undulating collection areas that present players with a variety of options (pitches, chips, or even putting). Every hole was freshly sand-capped and new drainage installed, resulting in quicker recovery during heavy rains and a more dependable allowance for buggies entering the fairways.

Laguna National's Classic Course revels in its reputation as one of the most difficult and dramatic tests of golf in Asia. Known locally as 'The Beast', due to its formidable challenge, the Classic unfolds over hilly terrain that is unparalleled in golf in Singapore. Visually stimulating and refreshingly bold in its presentation, the Classic challenges every element of your game. Featuring more than 146 bunkers, undulating putting surfaces, and five water features, the course can play to less than 5,000 yards for juniors yet stretch to 7,471 yards for the pros. Originally crafted in 1993, the course underwent a redesign in 2010. In 2017, a full reconfiguration, including the addition of two new holes and a re-routing of the renovated holes, was implemented to renew authenticity, soften angles, shape faster greens, enhance playability and modernize fairway and tee grasses. One of the main goals of the redesign was to make the course more playable and accessible. This resulted in new tees, new entry/exit points on all fairways for buggies, and more manageable approach shots into greens. 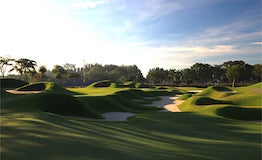